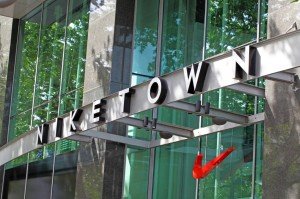 When an organization that depends on innovation has 44,000 employees, its CEO should be concerned. “Companies fall apart when their model is so successful that it stifles thinking that challenges it. It’s like what the Joker said — ‘This town needs an enema.’ When needed, you’ve got to apply that enema, so to speak.”

On our first day walking into Nike’s offices as consultants, we could feel the palpitating energy. It was a place of possibilities and we were excited to be a part of refining this already momentous culture towards greater adaptability to change.

Nike is a powerful example of corporate culture because Parker is serious about reinvigorating his organization on a regular basis. Nike’s annual revenue hit $24 billion last year, a 60% increase since he took the reins as CEO in 2006. Profits have grown 57% and Nike’s market cap has more than doubled. They released two breakthrough products which are game-changers for the apparel company: Fuel Band (an evolution of the Livestrong band that allows you to track your activity level during the day and share it digitally) and Flyknit (an innovation in simplifying the manufacturing and fit of shoes). 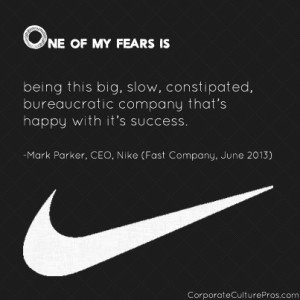 Here are a few secrets to the strong organizational culture that has made Nike’s enduring growth possible:

1) Know who you are. Nike is similar to other household name companies who have succeeded based on creating a “cool culture” – Apple, Google, Amazon, Zappos have all built cult-like status with powerful corporate cultures that attract and retain people who all feel a sense of belonging to a “tribe with a purpose.” In Nike’s case, tribal identity is “We have the best-kept secrets.” Not every organization can pull this off. The way Nike fosters this in the culture is not just about trade secrets, or the irresistible pull for “people wanting to be in on the secret.” Those are both important. At Nike, employees believe what they are doing is valuable – the secret is in the belief there is something valuable and important to protect. They internalize stories of secretive-ness because they are proud to be part of Nike. The legends that are told over and over, have led to lasting talent retention, which reinforces the culture (strengthening tribal identity). You are considered a rookie if your tenure is less than a decade. “Know who you are” at Nike means the strong organizational culture inside is aligned with how customers view the company – there is no disconnect between the internal and external brand. Employees love being inside the secret, and the customers can’t wait to get in on it. How does this alignment work in your organization?

2) Commit to being You, in every way. This means saying “no” more than you say “yes” – to ideas and to projects. The first prototype for the Flyknit was a tube sock sown onto a rubber sole. “Great ideas have something in common with bad ones: Early on, they both sound ridiculous.” But Flyknit, once approved, required a complete reinvention of manufacturing and engineering processes, as well as the supply chain model. Eventually it will allow you to custom fit a shoe to your exact foot shape. There’s no halfway when you commit to an idea that requires you to reinvent your manufacturing and business model! It requires being closely tuned into your customer and having a “6th sense” of what they will respond to. Are you in or out?

3) Be control freaks, in the right ways. Every company who has mastered innovation (beyond a steady stream of new cool products) knows that you have to control the process, just as you would with tight operational or cost strategies. Decision making at Nike is not about “empowering the masses.” While creative idea-generation is at the heart of the culture “the people who curate and make the decisions is a pretty damn short list.” The key is that people understand the process and know how it works in your business. If you have an organization like Zappos, you have to empower people on the front lines to make certain decisions. At Nike, creative control needs to be in the hands of those who have outstanding instincts for “what’s going to work in the market.” (Per #2 above, when you go “all in,” you’d better be right most of the time).

4) Feed your tribe-lore. Many know the famous Innovation Kitchen and the Winnebago that was bought on Craig’s List for $750 as their conference room. It’s a nod to Phil Knight (Nike’s founder) who sold shoes in the back of his RV. The clock inside the Winnebago reads 2:59 all day. It is said “That’s to signify a sub-3 hour marathon.” These stories circle as legends around the company, grounded in the 11 Maxims, which employees quote regularly and unprompted:

Innovation is not a program in this company. It’s the fundamental DNA on which the company is built.

What is your DNA and how is it being expressed in your organization?