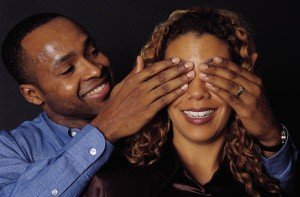 The last five minutes was the longest, waiting for her to walk through the door. We were sweating in the dark with the lights out, while those next to us stifled a few giggles and an occasional sneeze. The adrenaline was flowing fast as everyone anticipated the magic moment. Then, steps on the sidewalk.  The door opens.  The lights come on and 50 people pop out and yell “SURPRISE!”  The birthday girl – after exhibiting the appropriate shock and “Wow! You shouldn’t have!” – disappears for a long 20 minutes before emerging to join the party.

While writing our forthcoming book Small Change: Natural Truths for Transforming Corporate Culture, we have become deeply curious about the differences in how people manage life’s unanticipated events. Managers and leaders want to know: In the face of constant change and turbulence, how do we get more people to innovate, create, and bring their best to the workplace, more of the time?

Based on sound research that 3 out of 4 change efforts don’t deliver the expected ROI, two things seem pretty obvious:

1) Unless it’s Christmas or their birthday, nobody really “embraces” surprise.

2) Perhaps it’s time to adopt better, more resilient ways of adapting in an uber-competitive business world.  The business world doesn’t deliver surprises like “Hey, guess what!  We bought tickets to Greece today!” In business, it’s mundane changes that impact people’s day-to-day work environment: New software, restructuring, new products or programs, changes in policy, a new hire or addition to the team/organization.  These “surprise” changes are typically kept secret until after all the details have been worked out because leaders feel that’s best.  Without intending to, they unwittingly create emotional fallout by trying to do the right thing, and that fallout is left unattended to accumulate and fester like an untreated sore. This is no exaggeration. As experts in organizational change, we watch how inappropriate and unchanneled emotions from change lead to failed change efforts and lost productivity in every organization, every day.

This principle really isn’t hard to understand.  Remember when the way you found out your kid dinged your car was when you saw it?   When you got to the airport at the end of a week-long business trip, to learn your flight was cancelled – even though the weather was perfect – and the next flight didn’t leave until the next day? When the layoff comes with no warning – or safety net?

Can you honestly say that while you were in the midst of digesting those changes, you were at a peak state of creativity and positive contribution? If you are honest, can you really expect employees to feel differently when their job and reporting relationships change, sometimes more than once during a year?

If a person working in your organization has come to know and expect routines and processes to be one way, “I had no idea this was coming” will result in far more emotional baggage (and measurable productivity loss) then “I don’t like it but at least I had input and was warned.”  If you want less emotional resistance and fallout, give people notice that something new is coming (preferably in the form of collaborative involvement) …. and make the process personal … before the change is announced. This allows the necessary adjustment to happen more quickly and gracefully.

Given change is not letting up or going away, understanding a few innate truths about how to approach cultural change and change management can quickly restore your team or organization to their best productivity:

1) We want to feel “in the loop.” This is the opposite of “living like a mushroom.” People want to belong and they want to feel they are on the inside track. Because of today’s leaner, meaner, flatter management structures, supervisors and leaders are stretched to communicate enough to create that feeling. We suggest all managers with multiple direct reports create an informal, chatty, newsy update about “what’s new, what’s changed.” Preferably not a formal newsletter –a personal email is better. Think Facebook “What’s New” daily.  It’s about people feeling they are in the loop. A simple survey: “What do you want to hear from leaders, that you don’t get enough information about?” is a powerful way to learn what information is valuable to your people.

2) We are creatures of habit. Sure, human beings are an innovative species, always striving to make things better. And, even as we know intellectually that change is the “new normal” in business, we still respond emotionally when it happens. We prefer things to stay the same – when our routines are upset, it takes time to adjust. Emotion shows up very different depending on cultural background and personality, but it’s always a factor. Today, we are facing change-on-top-of-change-on-top-of-change in the workplace, making clarity about simple stuff like “Who’s in charge?” “Who do I go to?” “What’s the real priority?” hard to come by.  Gallup’s Q12 research shows 66% of people are “biding their time” or “dissatisfied” at work – proof that people have withdrawn and disengaged to cope. The remedy is simple: Always, always, always link change to what is staying the same.  “We are staying the course on our strategic plan.  This minor adjustment is necessary to get where we need to be….”  Answering 5 questions that everyone wants to know during any change is critical. A rule of thumb is not to announce any change as final until you’ve given people at least 2 “heads-up” warnings that it’s coming.

3) We are tribal. For thousands of years we lived in small packs and knew everything about everyone in our “world.” Decision processes were clear and transparent. We were taught to be suspicious of other tribes trampling on our territory – they brought unwanted competition for our food source. But leaders could do a lot more to build on our tribal “DNA” by structuring meetings so everyone has meaningful participation:  People share what they are doing, what obstacles they are facing, what good news is happening.  A leader’s job is also to attend to the “pick-up-sticks” process of change so tribal warfare doesn’t emerge over territory. This happens by sharing good news and setting up systems so people must reach out, interact, and cooperate in positive ways across boundaries.  Online social networking allows for simple and powerful interactions to take place.  Learning facilitation skills to influence effectively without using authority is crucial in today’s multi-dimensional, flatter hierarchies.

Wondering about our birthday girl and her 20 minute disappearing act?  She loved the idea of a fun party but after a really tough day dealing with people, the timing was terrible. It took her that time to find the smile and graciousness to join the party.

The bottom line?  Save surprises for tickets to Greece …. and stop allowing mismanaged confusion and emotional fallout during change to squander productivity in your workplace.

It costs nothing but your willingness to communicate more, sooner.