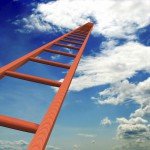 In these chaotic times filled with constant change, does it ever feel as if you are being pulled between worlds?  Today’s company cultures are struggling to keep up with the pace of global change. For an interesting parallel to how this impacts leaders, we turn to a popular culture example.

In the popular sci-fi television series Lost, Desmond was a character caught between two worlds: His consciousness alternated between two periods of time about 8 years apart. He eventually became unable to distinguish between the past, present and future, which led to great disorientation and intense physical symptoms.  He was instructed that he must choose a “constant” — someone in both time periods which he cared about and could recognize. Without a constant, his symptoms would worsen, eventually causing brain aneurysm and death.

His “constant” choice was Penny – the great love of his life. When his symptoms intensified, he must find a way to call Penny (given he was stranded on a deserted island, no small feat!)

In the midst of unprecedented overload, change, and lack of “steady state” in business – do you struggle for a constant? A continuous thread that knits together the past, present, and future, and keeps you centered and clear-headed?

For leaders guiding teams or organizations through major change – a critical “constant” is their vision. Regular, steady, unchanging communication about the one thing that everyone cares about and has an emotional connection to is an organizational version of a constant – a “call to Penny.”  In times when you are uncertain, off-course, disoriented, beaten down … re-connecting to your emotional constant is essential – it’s about remembering your passion. Today’s leaders must see themselves as an anchor to the “constant” – stoking the fiery passion of vision – for the dozens, hundreds, or thousands of people who are seeking more from their daily commitment than a paycheck.

More than ever, it is essential to commit to regular, steady, patient, inspiring communication. Think “out of the box” – and do it differently.

Leaders who think they communicate enough can “check their gut” against a few key symptoms:

If you are communicating enough, people will be visibly excited, clear and inspired by the vision, and projects will be mostly met on-time and on-budget.

You never meant for your people to wander the jungle in a state of Lost confusion.

Getting back on course is easier than you think. Call Penny today.